Villa Anna originates from the idea of two young professionals, Elena and Giulio, who wanted to make Anna’s wish come true, hence the name of the villa. Anna was Elena’s aunt, a capable and generous woman who, thanks to her professionalism and determination, managed to climb the corporate hierarchy of a well-known Alba company. Later she profitably dedicated herself to the freelance profession as an accountant.

Anna’s dream was always to build a villa on the land owned by her family. The villa was bought in the first post-war period by her parents Vincenzo (Censu) and Maria Teresa (Gina). For this reason and for the tourist renaissance that the Langhe area and Alba are experiencing, we have chosen to construct a new building devoted to the our guests’ peacefulness and well-being . The construction of the Villa ended in September 2019.

Being an architect, Giulio devoted himself to the design of the villa and he soon realized that a beautiful building or a beautiful swimming pool was what guests already expected from an elegant villa. Therefore, he had to go further, looking for new technologies, new (or old) materials, so he chose to opt for a wooden structure protected by a hydraulic lime shell mixed with natural aggregates, materials already known and used by the ancient Romans but re-employed in a modern way . The structure is finished with a 16 -meter glass wall overlooking Alba, the Langhe and the Alps.

The Villa has got a controlled mechanical ventilation system that allows the total recirculation of the internal air volume every three hours, an efficient heat pump for environmentally friendly air conditioning of the rooms, a series of motorized curtains for the penumbra of the internal rooms during the warmer days, a salt-water infinity pool and, above all, the true treasure … a private garden for exclusive use and an equipped kitchen area next to the pool.

We have talked about the renaissance of Alba and the Langhe, perhaps we should talk about a second renaissance, the first occurred in the late 1950s, when a series of personalities such as Michele Ferrero, Franco Miroglio, Pinot Gallizio and many others, combining an artisanal and entrepreneurial savoir fair, transformed a small provincial town into the forge of a cultural and commercial renaissance, which then resulted in the awareness of being part of a unique territory. A territory well represented by its wines and gastronomic richness. The entry of the Langhe into the UNESCO panorama has given birth to a new incentive to which we have responded by offering our best. 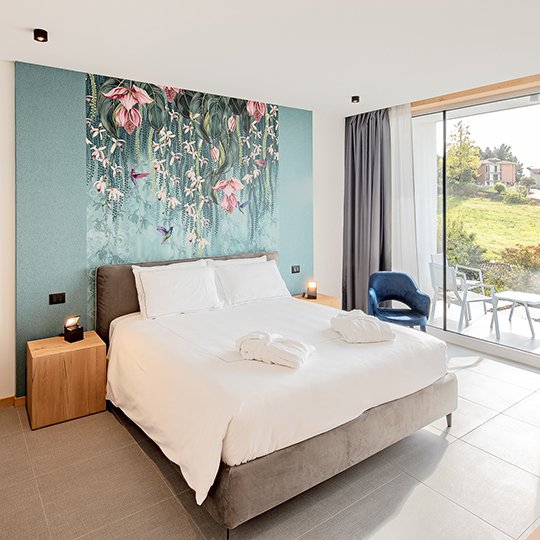 WITH ALL THE COMFORTS 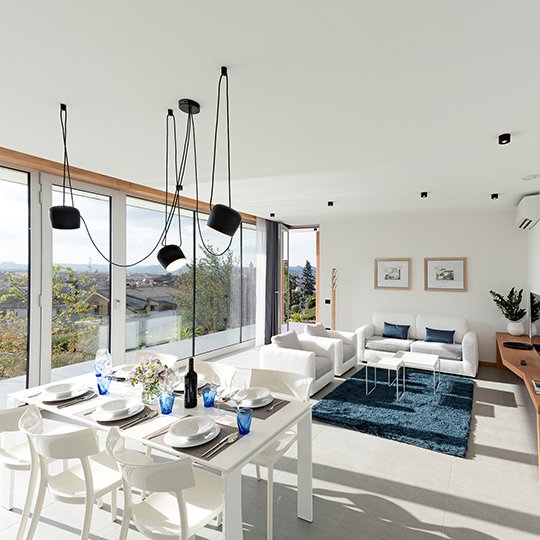 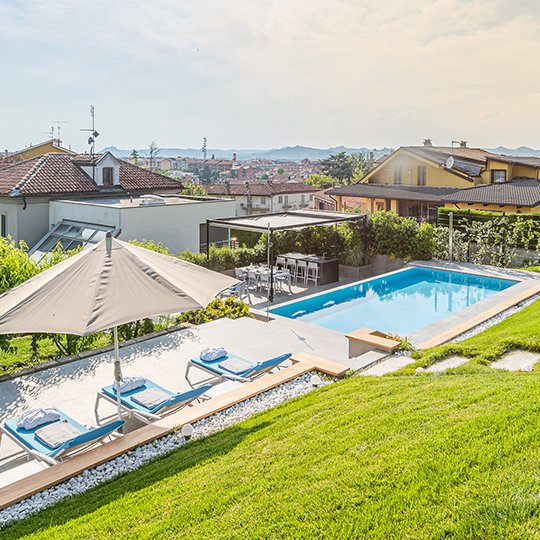 WITH SOLARIUM AND RELAXATION AREA

You can visit historic wineries and enjoy the excellent local food and wine: Gaja, Pio Cesare, La Spinetta, Ceretto, A. A. Roberto Sarotto, ...

Not only Langhe, there are numerous historical places in the nearby area: the Roman streets, the ancient monasteries, the residences of the royal house of Savoy, the ancient stone buildings.

You can do a lot of activities: trekking, personalized wine tastings, cycling tours, guided tours of the town, truffle hunting, visit to art galleries.

Enjoy all the comforts and possibilities that the villa offers you, in total privacy. The staff of Villa Anna is always at your disposal.

It is advisable to book visits to wineries, restaurants, tours or any other activities well in advance (especially during the International Truffle Fair)